Teen Dating Violence (TDV) is a significant problem with America's youth. Many TDV victims suffer in silence and do not report the crimes made against them. You can help support these victims and raise awareness for this important social issue with customized TDV awareness wristbands from AmazingWristbands.com.

The recognized awareness color for domestic violence issues is purple, but you can choose any color you want for your custom TDV awareness bracelets. Choose generic messages that inspire action and strength, or select a message that is more personal to you. You can even add your own artwork, or choose artwork from our image library. There are no minimum order requirements here, and bulk discounts make perfection for fundraisers. All high-quality wristbands from www.AmazingWristbands.com are durable, water-safe, flexible, non-allergenic, visually appealing, soft, and comfortable. 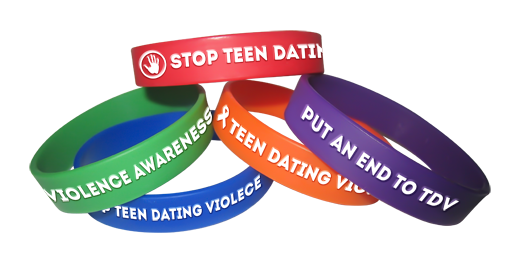 Teen Dating Violence can be a catalyst to a pattern of behavior that changes the lives of teens forever. Increased awareness and action is needed to stop the abusers while they're still young and let the victims know they have support and help available to them.

The well-known advocacy group DoSomething.org has compiled a list of important facts about TDV. Take a look:

CALL AND ASK ABOUT OUR AMAZING DISCOUNTS!